Ashwagandha (Withania somnifera Dunal) has been used for millennia as a rasayana or “life extender” in Ayurveda.
Researchers are studying how to extend healthy lifespan, including looking at some of the physiological factors that may accelerate the aging process, specifically, the degradation of telomeres. While ashwagandha has been suggested to increase longevity, there is only limited scientific evidence to support the claim. Could ashwagandha’s anti-aging effects be attributed in part to an ability to enhance telomerase activity?

“Ashwagandha root extract is able to enhance telomerase activity,” and suggest it should be evaluated under various adult onset disease conditions for its holistic protective effect. 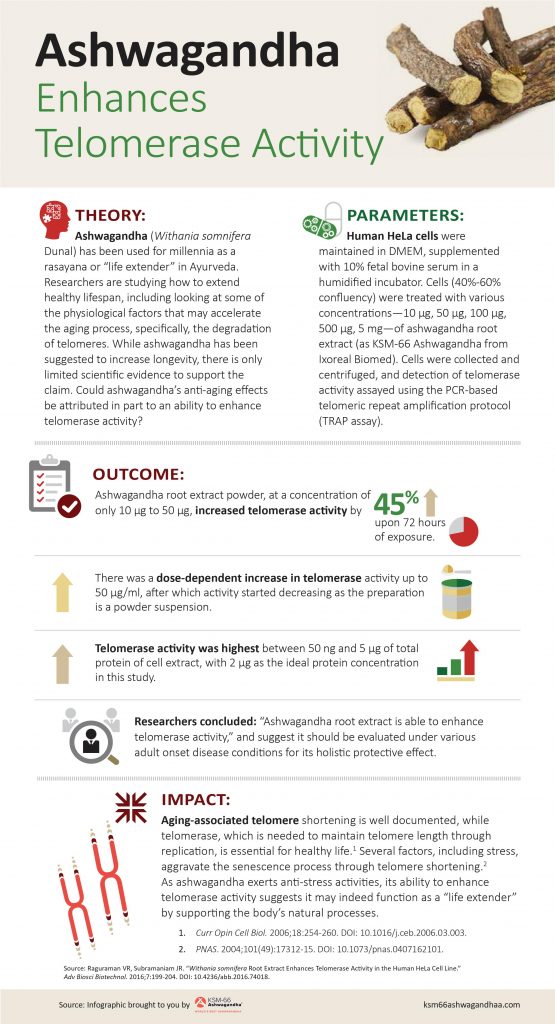 Aging-associated telomere shortening is well documented, while telomerase, which is needed to maintain telomere length through replication, is essential for healthy life.[1] Several factors, including stress, aggravate the senescence process through telomere shortening.[2]
As ashwagandha exerts anti-stress activities, its ability to enhance telomerase activity suggests it may indeed function as a “life extender” by supporting the body’s natural processes.